Hi there! As promised in my last post, here is a story behind the solitary bee house I now have on my balcony.

I have been contemplating beekeeping for a while. I mean, the bees are great pollinators, they are in trouble (with the rest of our planet’s insects), and you may get some honey out of it, right? Well, wrong… After weighing all pros and cons, I decided that honeybees will not be residing in the fire escape garden (for now, at least). Here are some of the reasons why:

So I mourned the idea of having bees and moved on with my garden lives. And then, I heard this interview with Dave Hunter on Bloom & Grow Radio, and it dawned on me that honey bee is not the only bee there is. I mean, I sort of knew that already, but the idea of actually keeping and propagating native bees never crossed my mind. As I was listening to the interview, I decided that I definitely need to reed up on this exciting subject, but I also already knew that I will be doing this! Fortunately for all of us, Dave Hunter is not only a bee enthusiast, he is also the founder and owner of Crown Bees, a company providing native solitary bees and bee-keeping supplies to the public, as well as to commercial farmers for efficient pollination solutions.

Because, as it turns out, honey bees are not the best pollinators out there. As I am writing this post, I am struggling to keep it focused on my personal experience with mason bees and not go on a tangent and explain the biology behind why solitary bees are better pollinators. Maybe I’ll do it in another post? For now, however, just trust me on this, or better yet, listen to Dave explaining it in aforementioned podcast interview, as well as some other sources I am listing at the end of this post.

Disclosure: I am in no way affiliated with Crown Bees, and I do not receive any products or compensation from this company.

As I headed to the product list, I was faced with some tough choices: what kind of bee house (they have very cute ones, if you can spend a bit more), what kind of bees, and how many? I settled on a basic (and affordable – $54.95) Spring and Summer BeeBasics Hut. The kit includes a hut (the large white tube), nesting tubes of two sizes, and the two kinds of bees – Mason and Leaf Cutter. Mason bees are active in the spring, while the leaf cutters fly around in summer (hence the kit name). My leaf cutters will arrive in early June, and I can promise you there will be a post about them! But this post is about the early rising mason bees.

My mason bee cocoons were supposed to arrive on April 18th, but thanks to the quirks of our friendly local post office (I’m being cynical here), I only received them on 4/23. On one hand, it seems like a five-day delay is not a big deal, but we are talking about living creatures here. As I was trying to retrieve my bees, I got in touch with the company and explained the situation. They were very understanding and sent me new cocoons right away. The cocoons are shipped with an ice pack that keeps them cool and prevents hatching for 24 hours. After that, the package warms up, and the bees emerge. In my case, they were still in the box with no source of food or water (the box was sealed, so they could not get out). When I held the box in my hands, I heard scratching and buzzing. So on one hand, I was happy, because at least someone was still alive in there, bot on the other, they were probably starving and dehydrated.

To calm the bees before opening the box, I put it in the refrigerator for about half an hour. In the meantime, I prepared the hut. Here is how it looked in packaging.

The nesting tubes are inside the hut. Dave advises against using bamboo stalks or drilling holes in the wood, because you can not take those apart, and so if any parasites get in, you won’t see them or be able to remove them. Instead, the recommendation is to use reeds or paper tubes (you can also make them yourself for free).

There are two sizes of tubes in the kit – 8mm diameter for mason bees and 6mm for leaf cutters. 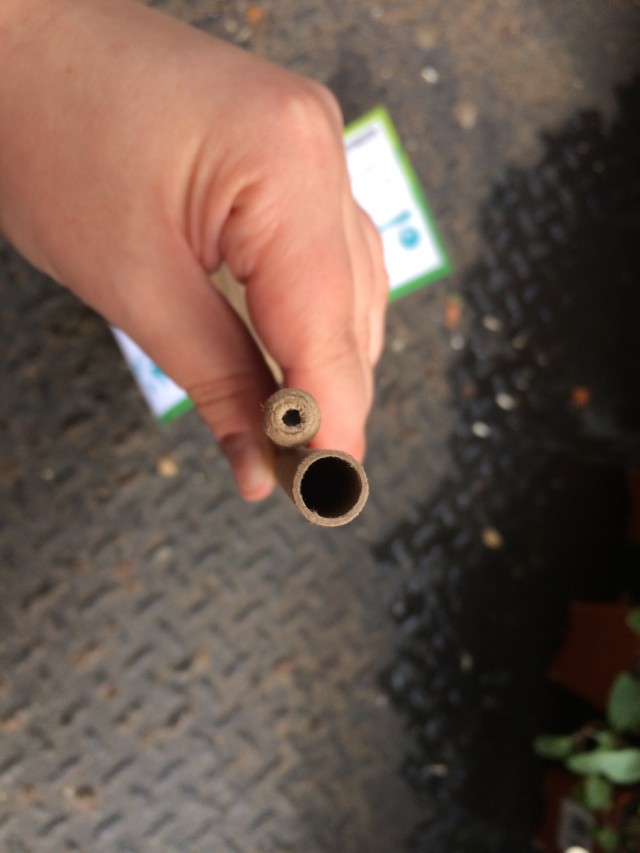 I then found the best spot for the hut. The recommendation is to place it so that the opening faces East, for the bees to be warmed by morning sun. I attached the hut to the bars on my kitchen window so that I can see it from inside the apartment, as well. 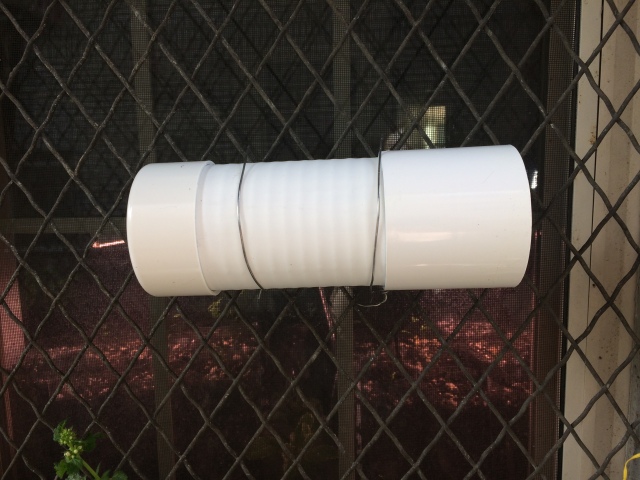 Then came the nerve-wrecking part: opening the box and finding out how many bees were still alive. Fortunately, all of them were moving.

The females, however, were more alert than the males. This is not surprising, as male bees emerge a few days earlier than females, meaning they were the most affected by my shipping mishap… 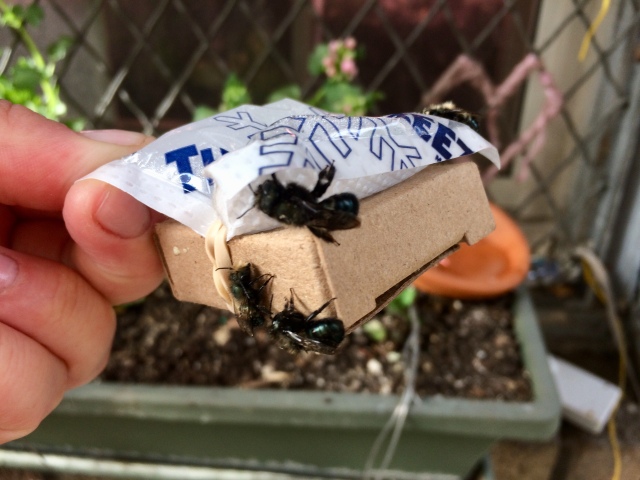 To help them recover, I made some sugar syrup (1:1 mix of sugar and water), and you can see video of a bee lapping it up below. Giving the syrup like I did (a small drop in a saucer), however, was not the best idea, and I had to scoop a few bees out of it. The correct way to deliver syrup is in a cotton ball, and you will see it later in this post (I used it with my replacement batch of bees).

Some of the bees were still in cocoon box. You can see a fuzzy head sticking out of the box in the photo below. 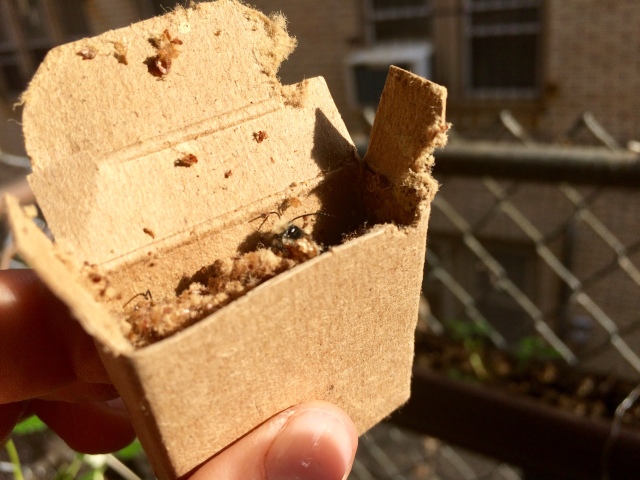 I put the cocoon box on top of the nesting tubes, in case anyone was still in there…

… and indeed, someone was!

In this video you can see a bee dropping out of the cocoon box. When they first emerge, the bees are wobbly and disoriented (to pot it frankly, they act as if they are drunk). They need some time to “get themselves together” and adjust to the outside world.

Now all that was left to do was make sure the bees had everything they needed. In addition to a source of pollen (at that moment, it was flowering arugula, kale and dandelions), mason bees need a source of clay. They need it to seal the eggs within the nesting tubes. And also, now you know why they are called mason bees!

Another absolute necessity is a source of water. And you also need to make sure that the bees don’t drown, that’s why I have that stone and a cork floating in the water. 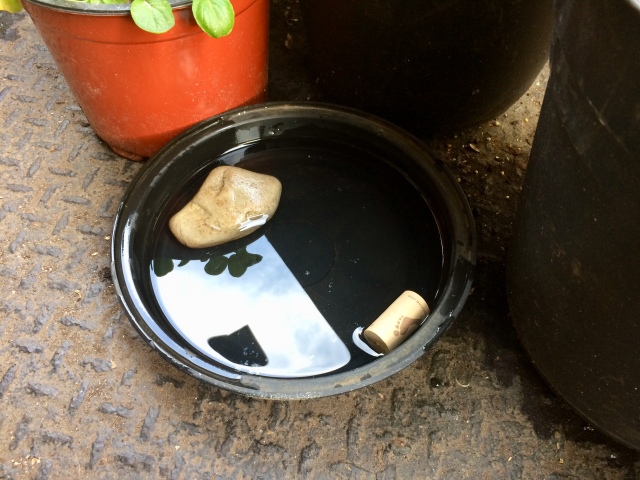 While the bees I’ve shown you so far were alive when I took them out of the box, I am not sure if they ended up surviving long-term. I hope at least some did, and I believe I saw one fly out of a planter when I was watering…

A week later, my replacement cocoons arrived, and this time I did everything by the book. I pre-chilled the box in refrigerator again, as instructed, and this time around everyone was still in their cocoons.

I placed the cocoon box in the back end of the hut.

Within a few minutes, a bee emerged!

I placed the newly-hatched bee on top of some dandelions, although I’m not sure it was ready for a meal yet… 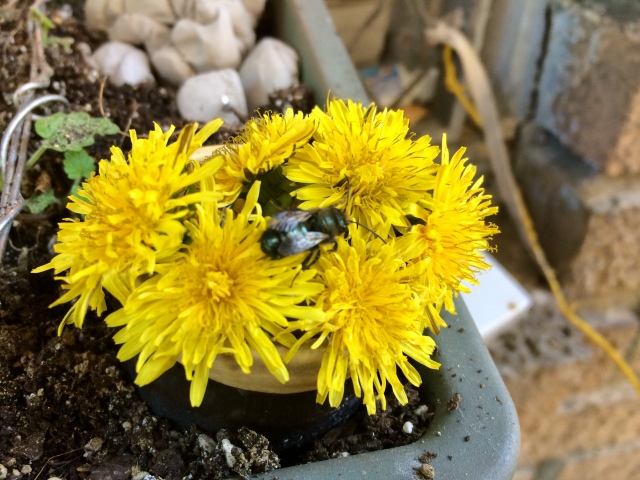 As mentioned above, the correct way to provide sugar syrup for the bees is to soak a cotton ball in it. This way, nobody drowns.

At first after releasing, I had no idea whether the bees were still there. I did not see them, and it could be because I am only home when they are not active (early morning and late afternoon), but it could also mean that the winds were too strong for them to get back, or that they simply did not like my balcony. And then I decided to pull out the tubes and see if there were any eggs… and there they were!

And then I finally saw a bee going inside the hut. Big sigh of relief!

Since I pulled the tubes out anyway, I decided to take the cocoon box out, which should have been empty by then. Surprisingly, some cocoons were still unhatched, and they would buzz whenever I touched them.

Apparently, as it was close to the end of their hatching period, the bees within those cocoons were getting weak and could not get out on their own. Fortunately, Dave Hunter provides lots of how-to bee videos, including this one showing you how to hatch the late bees. It was a bit scary, as I was worried about damaging the bees, but I managed. Here is one poking out of the opened cocoon.

A few weeks in, some of the nesting tubes are sealed all the way!

You may wonder if I see any benefit from having the bees around. I do! Here is an example: this strawberry flower has been pollinated and set fruit. Last year, I had to hand-pollinate all my strawberries, and this year I clearly don’t have to! I also planted a cucumber to use as an indicator, because it absolutely needs pollination to set fruit.

Another interesting observation is that in addition to my own mason bees, I am seeing other pollinators on the balcony this year! I see hoverflies and bumblebees the size of my thumb! This is wonderful, because last year there were none, and I had to hand-pollinate everything. I am, however, unsure of why this is happening. Could it be that the mason bees are releasing some pheromones that attract other pollinators? Or is it simply because I am paranoid about always having plenty of flowering plants to provide food for the bees? Whatever the reason, I am loving the results!

Podcasts and videos about solitary bees that inspired me (this is definitely not an exhaustive list):

This site uses Akismet to reduce spam. Learn how your comment data is processed.